By organising a hustings on Thursday 25 April at the Arts Centre Pocklington Town Council (PTC) Mayor Councillor Dean Hodgson has acted beyond his legal powers.

Independent ERYC Candidate Ruth Strangeway drew my attention to the seriousness of the situation after Councillor Dean Hodgson replied to her simple enquiry.

All 25 candidates are standing for roles that must be undertaken within statute. That is their primary objective.

Town/Parish Councillor Actions Must Be Mandated

Statute does not prevent Dean Hodgson, private citizen, from organising such an event. All Dean had to do was use his own address, phone number and sign it Dean Hodgson.

Sadly the invite is sent out in the name of Cllr D Hodgson, Town Mayor, Mayor of Pocklington with the Town Council address and phone number. This is clearly a PTC event.

Councillor Hodgson, and all PTC Councillors, must be mandated to undertake actions by the PTC and for this event he has not been. This means the hustings are organised in breach of statute.

On Thursday 18 April at 12.26 the Mayor of Pocklington invited residents to attend the event on social media via Pocklington Area Local Politics Facebook page. 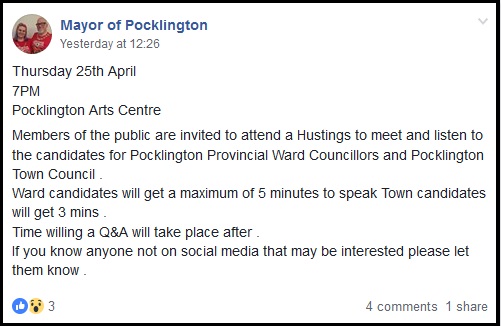 This confirms the Mayor of Pocklington/PTC is organising the event.

This clearly confirms that we/PTC are organising the event.

Candidates Must Not Condone

No candidate, standing to represent a Government body, can condone a hustings organised in breach of statute. To do so demonstrates, not only a lack of understanding for statute, but also a disrespect for statute.

Councillor Hodgson also falsely states that permission of the full audience must be given before they can be recorded. This is false.

Legislation states the full meeting can be recorded. This includes the audience.

How many other events are given free use of the Arts Centre?

I recommend that Councillor Hodgson informs all candidates of the concerns raised.

I can confirm neither myself nor Ruth Strangeway condone the breach of statute and as such will not attend the husting.

This entry was posted in Election. Bookmark the permalink.
Loading Comments...