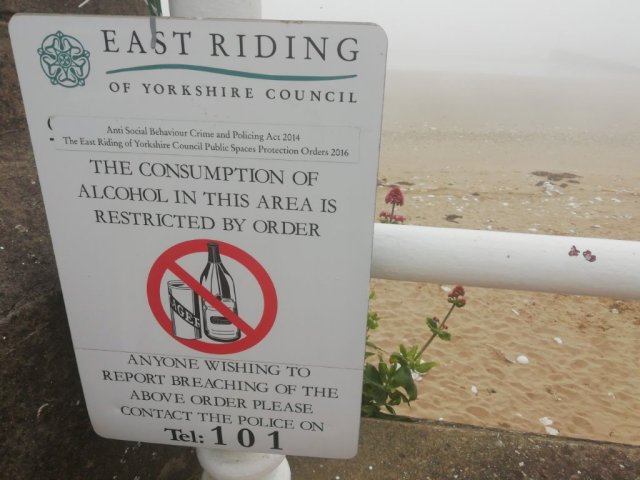 Regulations under the Anti-Social Behaviour, Crime and Police Act 2014 state that there should be sufficient signage in the area of the PSPO to draw attention to those using the area, setting out the effect of the Order. The Order must also be published on the Council’s website. The signage in the area does not necessarily need to set out all the provisions of the Order, but rather state where this information can be found.

Signage for the PSPO is displayed on the highway (the highway includes the road, footpath and grass verge).

As the signage is not permitted signage within the Traffic Signs Regulations and General Directions 2016 (TSRGD2016), no enforcement can take place. This is because the signs cannot be displayed on the highway, but sufficient signage must be displayed for all PSPOs.

The signs state “The consumption of alcohol in this area is restricted by order.”

The consumption of alcohol in the area is not “restricted”, it is prohibited.

As the signs do not reflect the order, no enforcement can take place.

The purpose of the TSRGD2016 is to ensure that all signage on the highway delivers an unambiguous and speedily understood message for obvious reasons.

Local Authorities, including ERYC, have become overexuberant in their use of PSPOs. They regularly fail to remember the intention of Parliament when they passed legislation that permitted the introduction of PSPOs.

As a result of a Freedom of Information request, I can confirm that no Fixed Penalty Notices (FPN) have been issued in relation to the Bridlington Public Space Protection Order prohibiting the consumption of alcohol.

I have registered a formal complaint with ERYC for erecting unpermitted signage on the public highway and requested the removal of such signage at the earliest opportunity.

The TSRGD2016 make all PSPO that apply to the highway unenforceable.

This entry was posted in Bridlington, ERYC, PSPO. Bookmark the permalink.