Posted on November 29, 2020 by andystrangeway

The Deputy Leader of East Riding of Yorkshire Council (ERYC) Councillor Mike Stathers has needlessly opened up a row with the ERYC Lib Dem Opposition Group that, especially given the current situation, is best described as handbags at dawn. 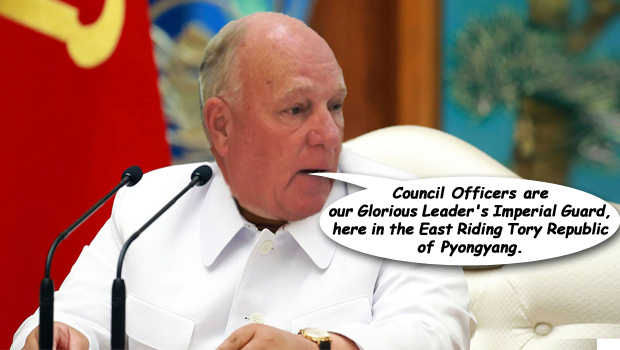 At the request of the Government ERYC have formed the Outbreak Management Board (OMB) to tackle Covid. The OMB consists of only Cabinet members, all of which are Conservative Councillors.

“Elected Councillors are barred from secret briefings on Council preparations to tackle Covid.  I was not even aware that a briefing was being held, until I heard it mentioned at the end of the Cabinet meeting.  I stayed on the Zoom call for the briefing but was ejected by Council Officers, saying it is only for Cabinet members.”

While holding his handbag the Deputy Leader of the Council, Cllr Mike Stathers, said:

“You have to wonder why Cllr Nolan became a member of this authority. Since his appointment as leader of the Opposition Lib Dem Group, he has done nothing but criticise and insult the work of the ruling Conservative Group. As the Opposition Leader, he should be scrutinising and challenging our decisions in the proper respectful fashion in the Council Chamber, but just for once it would be good to see Cllr Nolan work with us”

It does not reflect well on Mike to state “criticise and insult” yet admit Cllr Nolan should “scrutinise and challenge”. This is clearly a negative political spin. How or where Opposition hold to account is not for the ruling party to dictate.

I politely suggest to Cllr Stathers that he invites Cllr Nolan and a representative of the Independent Group onto the OMB to replace two of his fellow Conservatives. Without such representation, it looks to us mere residents that the Conservative Cabinet is doing exactly as the North Korean Politburo does.

I fully agree ERYC is like North Korea. Time to put your handbag away Mike and hold out the olive branch.

This does raise concerns as to how ERYC and especially Councillor Mike Stathers are conducting themselves.

Information from Whistleblowers is invited.