East Riding of Yorkshire Council (ERYC) has given their Declaration of Climate Emergency a slap in the face by needlessly issuing a Resident’s Pass for their Household Waste Recycling Site. Spot the irony. 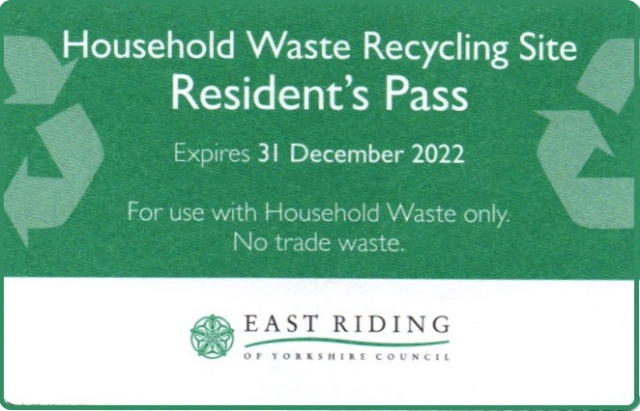 The reasoning for this appears to be to deal with Hull residents crossing the boundary to use ERYC waste sites and to curb queues.

Residents would be forgiven for believing this to be an episode from the sitcom Yes Minster which highlighted and ridiculed the need to necessitate their continued existence.

The idea that checking passes will curb queues is devoid of rational thinking. The process will obviously add to queues as Covid Passports are currently doing at UK Borders. This will require extra staff to administer. Talking of which how many employees and Councillors failed to identify how the Resident’s Pass is a white elephant? Is that collective stupidity?

How can ERYC declare a Climate Emergency then issue an estimated 150,000 Resident’s Passes on cardboard when there was no need?

A fundamental starting point MUST always be to not use resources in the first instance if they are not required.

ERYC has failed this most basic test.

Putting aside that there is no issue to resolve let us consider how we can deal with the issue that does not exist!

The purpose of the pass is to access the site in a car. For those who access a site in a car, a Driving License is required.

On the “rules” listed below it states:

And there is your answer. Forgot the Resident’s Pass residents can use their driving license instead. It really is that simple.

What a great idea Strangeway. That will save us from wasting resources and demonstrate that we are not all talk about our declaration of a  Climate Emergency.

Whoops, too late we have already been printed the Resident’s Pass. Take two, next episode of Yes Minister!

With an estimated 150,000 passes it is reasonable to suggest that the whole debacle has cost Council Tax payers £150,000. Between 2017 and 2019 I was the only ERYC Councillor who voted against the above-inflation Council Tax increases for three years. My reason for this was the waste of resources as the Resident’s Pass highlight is still an issue.

Money will continue to be wasted until ERYC abort this insane scheme. Not only will there be an ongoing cost to administer the scheme but there will be another major cost as the passes expire on 31 December 2022. Why has an expiry date been included? Are we now on episode 3 of Yes Minster?

What Happens If I Move?

Did anyone actually read this? What episode are we now on Minister?

Those living in Stamford Bridge and Sutton Upon Derwent account for over 1% of the East Riding population. They are nearer to the site in York than the Pocklington site.

Under the system currently being introduced are ERYC expecting these residents to make longer journies? Many of those who live in these villages have children at schools in York, shop in York, work in York and socialise in York. Using the site in York is environmentally the right thing to do for these residents.

How is the ERYC  Climate Emergency declaration looking?

I am informed that the Labour-controlled Hull Council has already introduced similar passes.

Thus the position is supported by the Conservative-controlled ERYC, the Labour-controlled Hull Council, and the ERYC Opposition Leader Liberal Democrat Councillor David Nolan who states:

Regardless of the colour of their shirt they are all just talking when it comes to declaring a Climate Emergency. They MUST all revisit their positions.

Yesterday I was astounded to be informed by an ERYC Councillor:

“I believe that the matter of ‘cross-border’ household waste recycling is being discussed with nearby authorities, for just the reasons that you state – that it makes better sense for the planet for residents to recycle as locally as possible and I will watch for a sensible outcome.”

So why issue Residents Passes?